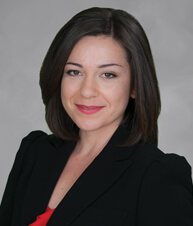 Before founding Vision Legal, Inc., Ms. Mehr prosecuted high-profile crimes for the Major Crimes unit of the Los Angeles County District Attorney’s Office, worked as an associate for two multinational firms, Dewey & LeBoeuf LLP and Alston & Bird LLP and clerked for the Honorable Paul L. Abrams, U.S. District Court for the Central District of California. She has extensive experience in all aspects of litigation in U.S. state and federal courts. Ms. Mehr focuses her practice on fighting for plaintiffs in employment, civil rights and consumer fraud matters.

Ms. Mehr was born in Tehran, Iran and emigrated to America in kindergarten. She grew up in the San Fernando Valley suburb of Los Angeles and is an avid fan of the Dodgers and Lakers. Ms. Mehr is an active member of the California Employment Lawyers Association (CELA).

U.S. Court of Appeals for the Ninth Circuit

Our Areas of Practice